Well, we’ve talking about it for a long time, and we finally took the plunge.  Yesterday, Valentine’s Day, Kyle and I went to the Nashville Humane Association and fell in love with Ty, an 8-month-old Basenji mix.  He was the fourth dog we spent time with, the first being a 3-month-old puppy, the second a very strong-willed uninterested lady, and the third a very, very shy hound.  While most of the other dogs were barking very loudly, Ty was quiet but very excited to see us.  He didn’t pull on his leash but pranced around a bit like a Clydesdale with what a worker there called his puppy wiggle.

We had been debating if we should get a puppy or a dog, and Ty seemed to be a good mix, not too young but still a puppy.  However, we had never heard of Basenjis, so we did some googling.  They may have been the Egyptian palace dogs of the Pharaohs, around when the pyramids were built.  They are African hunting dogs, known as barkless dogs.  Though they can make a lot of noise, including “screaming” and” yodeling,” they apparently rarely or never bark.  While we were at the shelter, Ty didn’t make a noise other than a little whining when he wanted to play with another dog; however, later when we were at Petsmart, he surprised us with a couple of barks, so he is capable.  Before filling out the paperwork, we called up my cousin Nic, a vet, and asked his opinion.  Though Basenjis aren’t very common, he has seen a few, and he said they seemed to be good dogs with not many issues, and being a mix would be helpful with those issues.  So we decided to go for it!

We weren’t sure about the name, and he didn’t seem to recognize it as his own, though it fit because he kept getting himself tied up in his leash.  We talked about a lot of possibilities, and then Ian and Robin called to ask us about him, and Ian suggested Tyson, to keep the name the Humane Society gave him, but add a little to it.  Kyle has always loved the idea of naming pets and children after scientists, so he immediately thought of Neil deGrasse Tyson.  When we took him outside, we tried a few of our options out, and we both decided Tyson was a good fit.  And so his full name is Neil deDogge Tyson, but we will call him Tyson, Ty for short.

Basenjis are supposed to be very smart, and because of this, they can be stubborn and hard to train (one list put them as the second least trainable dog).  However, he obviously is a mix as he is quite a bit bigger than a regular Basenji (though he is still fairly small, 38 pounds now, maybe will get to be about 45 pounds according to the Humane Society).  We’re not sure what else he is, but I told him once not to go in our bedroom, and he has not gone back in since.  He will come stand just outside the door sometimes when one of us is in there, but he won’t go in.  He likes his bed and his crate, and he only barked and whined a couple times last night after we closed the bedroom door, and once we opened the bedroom door he seemed to be fine.  He hasn’t eaten much yet, and he doesn’t seem to like treats, another possible issue with training, but we’re hoping he is just still getting used to things and will eat more soon.  He is very sweet and friendly, loves people and other dogs, and loves to play but is pretty calm so far when he is just sitting in the apartment with us.  We’re pretty smitten. 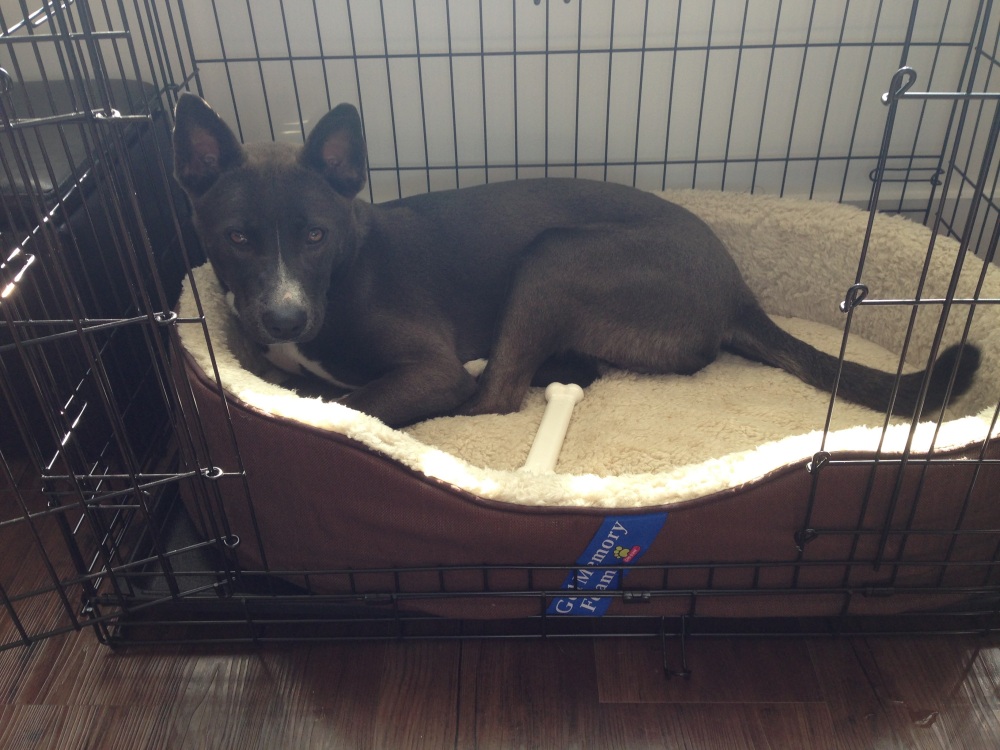